Or not…. our trip to the Gettysburg Battlefield. 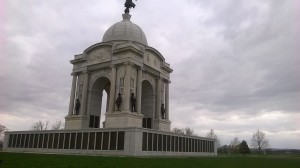 My daughter and my 3 grandsons were visiting this week from VT. We decided to take the boys(12,10 and 7, keep these numbers in mind as it may explain some things) to the Gettysburg Battlefield. The oldest was studying the Civil War, and especially Gettysburg. So we decided to take them there, since believe it or not they had never done this while living in MD. You know how sometimes you really don’t get to the places closest to you. We both thought this would be extremely interesting for them. However, that couldn’t have been further from the truth.

On the way there, I was sharing stories of my trips to the Battlefield and all of the knowledge I had picked up over the years. I really love going there and remember the first time I went in the fifth grade. I try to go at least once a year. It never gets old for me. I shared how many lives were lost over the three days the battle lasted and all of the souls I feel still exist there till this day and the fact that I can feel them. They thought that was gross.The oldest grandson shared some stories he had recently learned as well so I’m thinking wow, this will be a great experience for all of us. Imagine my surprise when the boys didn’t share my enthusiasm.

The first clue came as we pulled up to the Peace Light. This is one of my all time favorites and so we decided to start the tour there. I was so excited for them to see it and experience the same feeling I get every time I go there. The excitement building in the pit of my stomach as we pulled in the parking space. I envisioned them all running up to it and asking me how it stays lit like that in this wind. The real scenario was a little different. The two oldest didn’t even want to get out of the car. “Why do we have to get out, we can see it from here”, really..that’s what we got. I made them get out and go up to look at it’s majesty. They reluctantly ran up, looked at it for a full second and ran back to the car. The 7 year old, my daughter and I explored. First fail.

We took the entire tour and at every single monument I had the hopes that maybe they would start to see the “light” or get excited and want to get out and truly “see” one. Even the towers…what boy doesn’t love climbing up to the top of a tower and lean over and scare his Grandmother to death…evidently these boys. Again the 7 year old was out of the car and up the tower before I could open the door. I kept thinking in the back of my mind, wait till we get to Devils Den, they will love this. The view, the chance of falling off the rocks, the thrill of it all. So we finally pull up and once again they don’t want to get out. We made them go and as we start up the path to the top they say, “ok, its freezing, we’re going back to the car”. In all honesty, it was darn cold and very windy and cloudy which didn’t help. But these are the same boys that wear shorts all winter long to school everyday no matter what the temps. My daughter turned to me and laughed and said, “I have the car keys, they won’t be able to get in”. I smiled. We returned to the car to see two shivering boys standing there with a not so fun expression on their little frozen faces.

We made them get out one last time, at the Pennsylvania Memorial. I love this one too, another of my favorites. We told them it was the last one so they could make an effort. We all went up to the top and literally almost blew off. I was freezing but wouldn’t give them the satisfaction of knowing how cold I was.  We saw Lincoln’s statue and read the Gettysburg Address and went back to the car and headed home.

Later that night, I talked to the two older boys separately knowing I was going to write this and just wanted to get their real feelings on the trip. I said, we take them places all the time and we get the same reaction, it is a waste of our time and their time, so why should we bother. I asked both boys why they was so disinterested and wouldn’t get out of the car. To a word, they both told me they did really enjoy it. Each one said this as well…”Grammy, I was just cold.” I know one thing for sure the 7 year old really did. Not sure I’m buying the excuse from the other two, but they sure sounded sincere.

I fear we are raising a generation of kids that have no interest in our past and how as a nation we got to the place where we are today. They would rather stay home and play video games than visit a historic site. This makes me sad. What do you think?