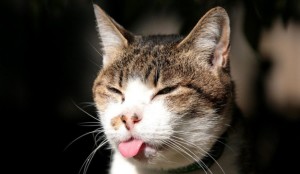 Are you offended by this cat? Maybe you like dogs and cat pictures offend you. Maybe you don’t like the cat sticking its tongue out. Whatever the reason, if you are, my advice is this..”get over it.”

Why is everyone so overly offended these days about literally everything? And also why do we rush to change whatever is offending them so they won’t be offended by it ever again. Until the next thing comes up that offends them.Yes, I know I used the word “offend”.. a LOT(and you will continue to see it even more). But there certainly are a lot of things offending people for some reason.

Who are all these people that get so upset over just about anything? When did we create a nation of people that are so self important that their opinion is the only “right” one? And then the offending thing is removed from existence so the people who were not offended can never have it again.. And many times it is one person who it bothers causing millions of others to be left wondering what happened. Where is the freedom in this? Why does one person get to have their way at the expense of others?

But it happens, and more and more all the time. If someone is upset over something, by all means let’s get rid of it all together. I guess I was raised in a different time, a time when if we were upset with something we were told to just deal with it. And we did and we moved on. It didn’t become a national issue and we didn’t have to get rid of said item. It wasn’t forever banished from the face of the earth.

For those wondering, I am not speaking to the recent “items” that are in the news this week. This trend didn’t just start today, it goes back many years. I think my first time dealing with it was while working at a major department store when I was told not to say “Merry Christmas” to the customers because “we may offend someone”. I was literally blown away by this. Who was I going to offend by telling them to have a “merry” whatever?

I myself am offended by a lot of things. I’m offended by having to be so politically correct and being absolutely afraid to say certain things without someone getting upset. I’m offended that we have to put warnings about how “hot” the coffee is on a coffee cup. I’m upset that kids can’t play cowboys anymore. I’m concerned that kids playing at a park down the street may cause their parents to be put in jail. I am upset by things and people but I am not calling for all things to be my way. I have to learn to live with the way things are today. Some people just can’t do that. These people are offended by items, books, religion, different people, logos and even food. One person doesn’t like the box the cereal comes in and we can’t get that cereal anymore.

And on and on it goes..why can’t we just “let it go?” More importantly why can’t we just forgive those who made the mistake in the first place. And really, if we want to be offended by something, let’s make it something important. Let’s be offended by hunger, poverty and homelessness. And better yet, let’s do something about it. Things that offend us go away very quickly these days so maybe if we are offended by the right things, something will get accomplished to rid us of these horrible things. A little love, compassion and forgiveness can go a long way towards a possible solution to the problems we face today. It is certainly better than the alternative and most definitely better than being offended by everything we see.

Hey, hope I didn’t offend you….