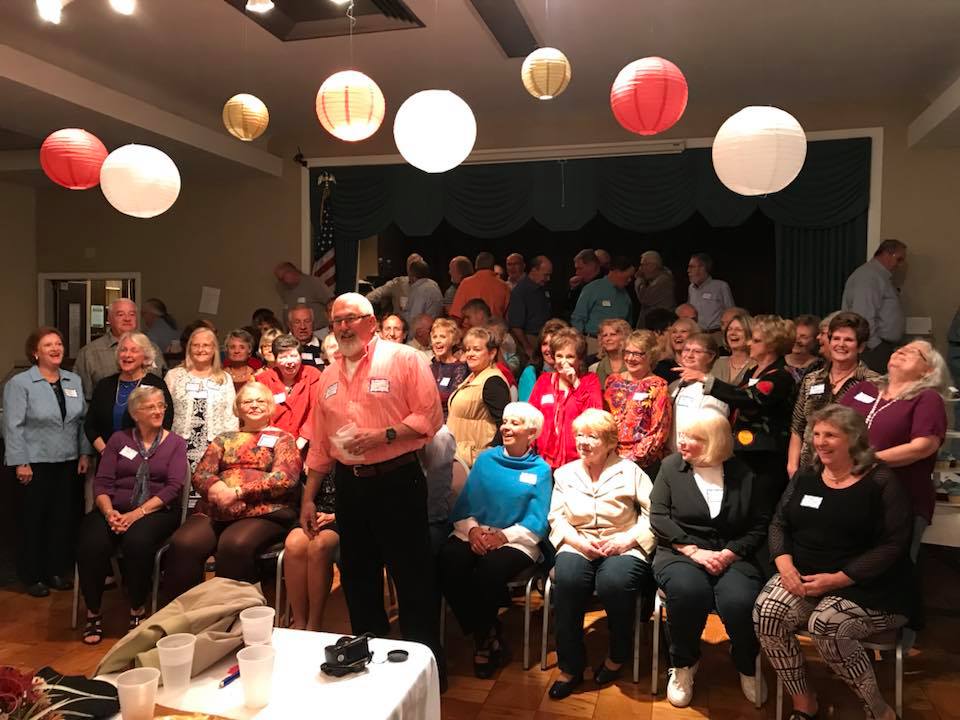 I enjoyed this class reunion so much..I think more than any before. The reason for this is that I realize how precious life is now and that maybe some of us won’t be here for the 55th. I might not be here for the 55th. A prayer was said at the beginning and the names of all those in the class who had passed were read aloud. I knew most of them had passed but to hear that list made me so very sad.

The day started out on a somber note and ended on a happy one. I walked in The Out of the Darkness Walk to promote suicide awareness in honor of my son in the morning. I couldn’t help the walk and the reunion were on the same day and thought I would be able to do both with no problem. I did the walk last year as well and forgot how emotional it was for me. Not a good way to start out a fun filled day with my class of 1967.

I came home from the walk exhausted both physically and mentally. I even thought about not going to the reunion. My daughter was going to my home town as well to meet her cousin and said she would take me and pick me up so that made things a bit easier for me. I wouldn’t have to drive home at 11:30 at night by myself. So I decided I would go. I had been looking forward to the reunion for quite some time and thought I just needed to make myself do it.

Now the next step was deciding what to wear…I had an outfit picked out but that didn’t give me the desired look. You know the one I talked about last week…the one where I looked 20 years younger and 30 pounds lighter…or was it the other way around?? Well nothing in my closet came even close to doing that. So I just settled on wearing what made me feel comfortable.

“Sometimes you will never know the value of a moment until it becomes a memory.” ~ Dr Seuss

Ok, I know you are all waiting to hear about the person I was hoping to avoid seeing. If you read last weeks post you know I had some trepidation about a “certain person” that I had heard was coming to this reunion. A person I hadn’t seen or heard from in 25 years. There are many reasons I was hoping to avoid seeing him…but you will have to wait for the book to come out to find out exactly what those reasons are.

A bunch of us arrived together making me feel a little more relaxed. As I walked in the door my eyes quickly scanned the room for him but I didn’t see him. I realized he wouldn’t look like he did 25 years ago but I didn’t think he was there and felt more at ease. The group I was with quickly found a table and then we all started walking around talking to everyone. I loved catching up with people I hadn’t seen in forever. There were quite a bunch of them who hadn’t been to a reunion in a long time that came to this one on Saturday night.

Dinner was served and still no sign of “him.” I couldn’t take the suspense any longer and asked one of the committee members if “he” was coming? The committee member said he had indeed paid but was not there. Maybe he wasn’t going to show…it would be so like him. I was very relieved and I know my friends were relieved for me as well. Not five minutes later, the same committee member came over and said, “I spoke to soon. He just showed up!” He also went into why he was late…a friend(a girl of course) wasn’t going to come and he talked her into coming with him. But she hadn’t paid for a ticket, so he had a brief discussion at the sign in table to get them to allow her to come in with him. But she wouldn’t eat… And quickly added that they were “just friends”…

I searched the room, but still didn’t see him…until I did..he was of course sitting with his usual group of friends. And the girl. I continued to do what I had been doing…talking to people, people from different parts of my life. Elementary school, junior high and high school. We all marveled at how social media had kept some of the group in contact. And more than a few said they liked knowing what is going on with people in our class every day even though we are miles apart.

I was surprised at the number of people who were on social media and especially the ones that said they read my blog. It is hard to know who reads it when people don’t comment on it. I was pleasantly surprised. So many telling me how much they loved it and to keep on writing. A few asked who “he” was and a few, much to my surprise, said I know who “he’ is.

Things were going along quite well, I was having a great time and thought I dodged the bullet and he wasn’t going to talk to me. Maybe someone had even told him I didn’t want him to. All of the sudden, as I was standing by our table talking to two friends… I felt an arm go around my shoulders. I didn’t need to turn around to know whose arm it was. But I did. Here is how the scenario played out..as I turned to find his face almost directly in mine…

Him: “You still live in Frederick?”

Him: “Where are you living now?”

Him: “Well you look great.”

And with that I turned around and started talking to my friend again. I felt him take his arm off of my shoulders and walk away. That was it! The next day, I was second guessing myself. Should I have talked more to him? Should I have asked him why he did what he did and why he lied? Should I have given him the chance to explain? But then I thought to myself… I bought his story 25 years ago, would I have bought the one he would have told me Saturday night? Was he different now, had he changed? He really had a line, always has. I am a pretty good judge of character and he had me completely fooled 25 years ago. I wasn’t going to give him the chance to do that again.

I don’t know and now I guess I never will know if he has changed. I hope so. For him and his family. I do know now I made the right decision not to get into a lengthy conversation with him. I enjoyed my 50th reunion.. I didn’t let him ruin that. I couldn’t  let that happen. There were too many good people there and too many good things happening. I wanted those to be the memories I remember when I think about that night. But I also want to remember I stood up to him, I didn’t back down. I think he must know why I did what I did or he wouldn’t have given up so easily and walked away..but then again knowing him, maybe he doesn’t. And that’s ok too.

Do you go to your high school reunions? Why or why not?

“Yes, we talk to each other on Facebook… but that just isn’t good enough….you can’t hug someone on FB. And I like to hug.” ~ me