The Helpful Hellion > Miss my Dad 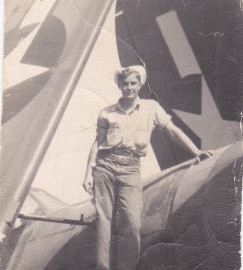 but the words he spoke left quite an impact 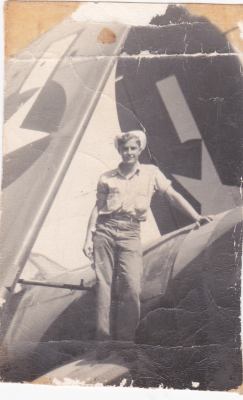 Last week was my Dad’s birthday, he would have been 89. I miss my Dad more with every passing day and his death has left a void in my life that no one can ever fill. Dad was a strong, quiet, hard working man who loved his family…and golf.

Back in his day working hard and providing for your family showed how much you loved them. That was all you needed to do. You worked and worked and when you finally got home you were so exhausted you couldn’t do anything else. Dad worked 2 jobs, 6 days a week so there wasn’t a lot of time left at the end of the day. Most nights he would just fall asleep on the couch watching tv.

He played golf on Saturdays after work and sometimes on Sundays. But Mom didn’t like him playing on Sundays so that didn’t happen very often. We would have family picnics in the back yard and Dad would be the one who tended to the grill. There was always a problem getting the charcoal to light and there would be a few words spoken that we pretended not to hear. But he got it lit and the burgers were great! I sure do miss those times. This is the only time we ever saw Dad cook. When Mom was in the hospital having my sister, my Aunt had to come and feed us due to the fact my Dad was making us cereal…cold cereal.. for every meal. Funny thing is when Dad was in the Navy, he was a cook on the ship. Guess he got tired of it and vowed to never do it again.

I learned a lot from this man. I certainly got my work ethic from him. And I saw his respect for my Mom and the way he treated his own mother. Back in the 50’s and 60’s most women didn’t have a voice. Men ruled the house and what they said was law. But that wasn’t the case in our house. Mom had a voice, boy did she ever. And Dad let her have that voice. He would say his piece and then Mom said hers and basically Dad deferred to Mom. I remember a few times it went on a little longer, but I was very young and by the time I was in my teens, Dad had just given up and he would just let Mom win. He was a smart man.

Dad also had a sense of humor. You didn’t see it very often and most of the time a few beers were involved but he had a very dry sarcastic sense of humor and it cracked me up every time. I think maybe I got my sense of humor from him. I’ve been known to express a little bit of sarcasm now and then. It was always funny to see this side of him when we had people over to the house. My normally quiet father turned into a comedian. Everyone thought he was funny, especially him.

He never yelled at us except when we would have the refrigerator door open too long, which to Dad was anything more than a second. Lights were always turned off on us, even if we were in that room reading. “You don’t need a light on the sun is still out.” Heat evidently wasn’t needed either as it was always shut off to the upstairs and if we turned it on for some dumb reason… like maybe us seeing our breath…. it was off within minutes.

Since my sister and I didn’t have much interaction or playful moments with Dad, you can imagine how surprised I was at the way he treated my kids. He was so loving and played with them any time he could. I never understood why that was until I had grand children of my own. You have more time and you don’t have all the rest of the stuff that goes with raising them. You can just enjoy them. I know I do.

The only time I can honestly say that my Dad let me down or missed a moment to really connect was when he found out I was pregnant. I was only 15 and looking back on it now I can kind of understand his reaction. Especially due to the fact it he wasn’t a very touchy feely kind of man and didn’t know how to react. So he chose to not speak to me for several days and when he finally did he told me he was disappointed in me. I was already disappointed in me, I didn’t need my father saying it. I wanted him to hold me and tell me it would be ok. He didn’t do that then, but his actions the next several months and the years ahead proved that he loved me and stood by me.

The last time I saw my Dad, he and my Mom had come to Ocean City, MD to spend a few days with me at the beach. A few days later he was gone. Dad had recently retired and had more time to do fun things like go to the beach and play more golf. He played every single day…well maybe not Sundays. He always said when he retired he was going to play golf every day and he did. He was actually out playing the day he died. Something else he always said was that he wanted to die on the golf course and he did. Who wouldn’t want to go doing the very thing you loved most in the world?

A father shouldn’t just be a sperm donor or someone who just gives their last name to a child. My Dad proved this and my own son proves this to be true as well. My son didn’t have a very good role model in his own father but he is the best Father to his children I have ever seen. He teaches them with so much love and respect. He isn’t afraid to show them he loves them and as a result they are respectful and loving children in return.

I think how our parents treat us and others truly shapes our lives. Sometimes its good and sometimes it’s not. But whatever the circumstances of our childhood, we can’t continue to blame them for our problems. At some point we have to move on and take responsibility for our lives. I didn’t have a father that constantly talked to me, played with me or one who showered me with love. In fact, he never once told me he loved me. But I knew I was loved. He may not have said the actual words but he proved it by his actions.

My Dad was a wonderful man and I miss him. Happy Birthday Dad! He used to say it never rained on the golf course. So Dad, I hope the grass is green and the sun is shining and every hole is a hole in one!

“The most important thing that a father can do for his children is to love their mother.” ~Theodore M Hesburgh

Do you have a great story about your Dad to share?