“Top 10 Things You May Or May Not Know About Me”

Just a fun blogpost of things about me… 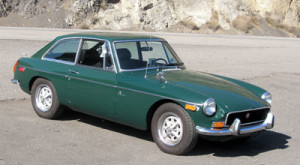 1. My favorite car that I ever owned was my green 1966 MGBGT. I loved that car. It cost a mint in upkeep but I still loved every moment of owning and driving it. I didn’t get it until the 80’s but I sure got all the fun I could out of the years I had it. I would pile all 3 of my kids in that little hatchback area and off we would go on our adventures. We had some great times in that car. Couldn’t do that now…

2. I have had every job from waitress to restaurant manger. From working at a jewelry store to owning a women’s fashions and jewelry store in downtown Frederick. I owned my own store for 4 wonderful years. I had to close it in 1991 when the bottom fell out and 20 some other stores closed as well as mine. It was one of the saddest days of my life. It was truly one of the best, if not the best “jobs” I ever had. I had always wanted to have my own clothing store and I did it, even if it was only for a little while.

5. I got pregnant at 15, 3 months shy of my 16th birthday. It was not an easy time, you didn’t get pregnant and stay in school like they do today. My friends were going to prom and I was in the hospital giving birth to my daughter. I wouldn’t have traded places with them for anything.

6. I had all 3 of my children by the time I was 23. We grew up together. I for the most part raised them by myself. Sometimes working 3 jobs to take care of the bills and to get them the things they needed. Sure, I made mistakes and maybe wasn’t there as much as I should have been, but I did the best I could. There was no manual that came along with the whole single parenting thing. Their father chose not to be involved in their lives when they were all still fairly young. Again I would not change any part of having these 3 wonderful kids in my life. They give me a reason to get up in the morning. We have had our ups and downs but we love each other unconditionally…and in our book..Family is forever.

7. I moved to Maryland from PA 30 years ago. I needed a change after the second divorce and needed there to be some distance between us. My live in boyfriend at the time got transferred to MD with his job and I decided to go with him. I have never regretted for one moment my decision to move here. I love it here. I am close enough to my friends and family as I am only an hour away. I moved from Frederick to Thurmont 7 years ago when I wanted to be a little further out in the country. I also have always wanted a big “old” house. Mine was built in 1890.

8. My first journey into entrepreneurship was at the age of 12. I wanted a dog, a poodle to be exact. My parents said I couldn’t get one unless I paid for it. I did babysit but that didn’t get me even close to the amount I needed so I talked the neighborhood kids into donating money to my cause. They all did, much to their parents chagrin. But somehow I got my poodle. I just had to have that kind of dog for some reason and now I don’t even like that breed.

9. I am sure most people know this one..I have curly hair. Naturally curly hair, way to curly for my liking. I have ironed it, I have straightened it. I have cut it short and let it grow very long. I even wore a wig in the 70’s when that was the rage. It was straight. I loved it. Nothing I ever did has changed it. Everyone said, “just wait until you have kids, it will get straight.” Well I am here to ditch that myth. I had 3 kids and my hair is curlier than ever. If anything it is curlier than it was when I was younger. Maybe I will get another wig or cut it very short and be done with it.

10. And last but certainly not least, I have always wanted a place at the beach, by the water. After all the recent hurricanes and bad weather I have revised that dream somewhat. I still long for that beach house but my beautiful view of the mountains will suffice for now. At this point of my life I have many friends who live close to a beach. I  will visit them.

Oh, and one last thing…I absolutely hate the white thingys in eggs…